I miss the days when the Tony Hawk’s Pro Skater (THPS) series was actually awesome. After playing hundreds of hours in what I’d like to call the “original, holy THPS trinity”, which was THPS 1, THPS 2, and THPS 3, the series once had a very special piece of my heart. The recent THPS games, which, like Voldemort from Harry Potter, will not be named, tore my heart into two, though. So, I’ve pretty much lost any sliver of hope in the series making an epic comeback. Thankfully, Funktronic Labs’ Wave Break takes what made the THPS series so steezy, but it also has a Wave Race 64 vibe for good measure —  and surprisingly, cute characters and guns.

At GDC 2019, I had a chance to play an alpha build demo which let me rack up trick combos in one jam-packed level. The level basically had one main part of it that was, from what I could tell, a big hotel, and then surrounding the building were obstacles to do slick grinds on and ramps to do sweet aerial tricks.

While the theme of the level itself was unclear, what was wild about the level design was that it gave the player the freedom to do tricks on just about anything — whether it’s landing a 50-50 grind on a tilted coconut tree or getting some air from going up the side of a pool and doing a 540 spin with a boat grab. Not once did I ever feel restricted when I was trying to pull off a line of tricks, which brought me back to the insane combos I’d get in THPS. The only very minor issue with the level design was that it was a bit too spread out. Even though the build I played was just in the alpha stage, there still was an impressive number of tricks to have fun with, including wheelies, that made it easier to keep combos going. Some tricks, like kickflips and spin flips (basically, pop shove-its),  lean more towards the skateboarding side of Wave Break, whereas other tricks are more silly and unique, like one called the “High Roller” that’s a quick front flip. What was a really nice surprise was the inclusion of quick tech grind changes, so going from a 50-50 grind to a boat slide (boardslide), was smooth, and the addition of wall rides was actually pretty cool since it had the rider (the character) jump off the boat and use his little legs to walk across a wall then jump right back on the boat. Needless to say, Wave Break won’t have a lack of tricks to pull off.

However, the real question on any THPS fans mind is: “Does it all feel good?” I’m happy to say that Wave Break‘s controls were tight and felt just right — it didn’t feel too floaty or grounded at all. Everything was absolutely solid, no matter if I went off a ramp or popped out of a grind.

Another neat feature that players will like is that there are a good number of customization options available. Players in Wave Break will be able to choose from multiple options for their character and their boat, which means that players can be looking as silly or as rad as they want to be. There were a lot of features in Wave Break I liked, but one feature seemed a little off, which was the gun shooting mechanic. For the build at GDC, players had the option to whip out a machine gun to blow up explosive barrels and cause destruction — doing this racks up more points. Not only can players cause destruction, but the developer mentioned that players can also shoot at other players. The mechanic itself looks cool as it causes a slow-mo effect to occur and of course, blowing stuff up is always awesome, but for some reason, it felt out of place. Having it does make it stand out from THPS games, for sure, but I’m thinking that I didn’t like it because it messed up the flow of the game. Maybe I didn’t get enough time to really experience the mechanic, and I’m sure it ties in with the game’s story, but I’m hoping there will be an option to turn it off in the game’s beta or full release.

Regardless of this mechanic, multiplayer will still be a blast in Wave Break. For me, I had a great time going head-to-head against another player in local multiplayer. For players that want to show off their skills to the world or simply just friends from afar, Wave Break will have online multiplayer, as well. Wave Break is the Tony Hawk’s Pro Skater and Wave Race 64 fusion that I didn’t know I needed. With its stellar gameplay and tight controls alone, Wave Break is shaping up to be a top-notch, trick-filled arcade game that I’ll be pleasantly addicted to. If you’ve been dying for a THPS-like game, as I have, then make sure to check out Wave Break.

Right now, Funktronic has an alpha test going on for Wave Break. To join, all you have to do is be a member of Funktronic’s Discord channel. Wave Break is currently set to launch on Steam sometime this year. 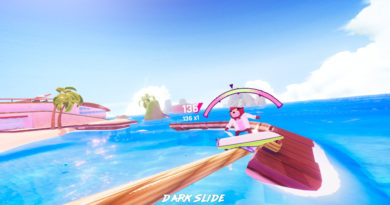