About one year ago, I had heard of Tower of Fantasy after scrolling through the great forums of Reddit. And well, I was instantly interested and curious, but sadly, with the game being confined to China, there was just no way of playing it. But that changes today, as I get to try the closed beta of the English release that is set to release this year on PC and mobile. Open-world games have since become ubiquitous nowadays, with Elden Ring, Genshin Impact, and even the Pokémon series taking a shot at the style, so of course, I was intrigued to see how Tower of Fantasy would compete with its contemporaries.

Tower of Fantasy is a sci-fi open-world game that was previously released in China last year. The story tells you about how humanity created a new civilization on a planet called Aida, and by doing so, came across a mysterious yet potent energy called Omnium. To successfully mine this mysterious material, they built the titular Tower of Fantasy. However, things took a sour turn really quickly, as Omnium radiation and the temporal rift that was caused by the excessive mining almost destroyed the entire Aida civilization.

As you’d expect from an open-world game, there’s a lot you can do, such as explore ruins, open chests, do challenges, defeat bosses…your typical list. What sets this apart from its contemporaries is the insane amount of items that you can use to assist in your journey. Bombs, motorcycles, cannons, jetpacks, waveboards…the list just goes on and on. The controls feel a bit awkward, but that might be because I’m not typically used to playing MMOs with a keyboard. Controller support is available. but the game did not take too nicely to my DualSense (I know that sounds like a first-world problem…), and I hope future betas can possibly fix that.

Let’s get to what’s perhaps the main point that might either scare people off, or attract them to the game: Yes, there’s a gacha system, and it seems the developers took on some notes from Genshin Impact, because the rate to get a 5-star is a whopping 0.3%, increasing to just 2% when you’re nearly getting to the 80-pull SSR guarantee. Oof and ouch. And to make matters worse, there are three types of currencies, and the purple currency, though abundant, won’t guarantee you an SSR after X pulls. Even if my luck allowed me to get a 5-star fairly early, I can only imagine just how the amount of players that might have to stick to the stock and 4-star units might be vast. And the 5-stars do contain some rather amazing abilities, such as the Dual EM Stars, which allow for an insanely fast barrage of AOE attacks.

There were lots of bugs and crashes I encountered, but given that this is but the first closed beta of four (according to the developers), I’m sure there will be fixes on subsequent versions. However, one particular bug stood out to me: The first was the cutscene where the protagonist attempts to disarm some bombs that were implanted across Hykros. However, that first attempt fails, and an explosion rewinds time about 30 seconds back. However, the protagonist…speaks in that cutscene…in both the male AND female voices. Yeah you heard that right. What ends up happening is an overlapping voiced cutscene of both the protagonist’s male and female voices. I must admit, that cracked me up.

If I were to describe this game in a few sentences, Tower of Fantasy is like a combination of Honkai Impact‘s futuristic and sci-fi story style with some of the open-world mechanics found in Genshin Impact, with the developers’ own twists on top of it. I have high expectations of how they’ll develop the futuristic story of the continent of Aida, even though I’m almost 99% sure that it will have to do a lot to avoid facing the backlashes of the toxic people inside the Genshin Impact community. 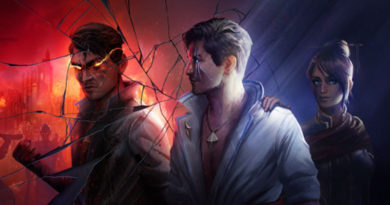