Isekai’s are plentiful nowadays. Who wouldn’t want to reincarnate in another world with a chance to change everything? This theme is prevalent in current media trends, and The Humbling of a Holy Maiden is par for the course in this genre. You have been summoned as a hero to destroy the Demon King, but you’re introduced as filthy casual who enjoys gardening and carpentry. Let’s see where this all goes.

The Humbling of a Holy Maiden takes place just as the Demon King has been destroyed.  Although you would think that our holy Maiden would be relieved that the villain terrorizing her town is defeated, it’s quite the opposite. She seems worried about her people, and privately, her faith in God is shaken.

Her job as the princess is to rule her people with the strength of God. Our Maiden’s shortcomings will become more apparent without an ever-present evil force to scare the population.  Embarrassed by her luxuries, our princess wishes now more than ever to experience life as a commoner.

The Maiden has but one confidant in these terrifying truths, her filthy gardener, our protagonist, who enjoys talking about the richness of the soil, and some otherworldly knowledge of his past life.  After discussing theocracy and taxation through tithing, our protagonist and Holy Maiden come to a similar conclusion. Perhaps romance is a more powerful force than God. Both the Maiden and our protagonist decide that if she understands what her people have gone through, she will have to experience it too.

As a visual novel, there are no choices as this is a kinetic story. The key art is rather striking, and backgrounds are admirable and blurred during conversations to exhibit the characters while they dialogue. I found the art and character design to be splendid. The purple-haired Maiden was adorable and had a wide variety of facial expressions that animated her during each scene. I found the most unique aspect to be how she made her own sound effects for all the non-sexual things she does. Although the Music is fitting, it can get a bit repetitive.

It goes without saying, this game is for adults only, and there is no mosaic censorship.  You are a professor to the young Maiden, a Senpai if you will, and with all your otherworldly knowledge, she hopes you will be able to show her a world she does not know. Most of the focus is surrounding submission and humiliation.

The Maiden believes she must understand her people and bring about a revolution, and she enjoys it too. However, we quickly learn our protagonist is a bit of a freak. From toys to wooden restraints, these cover a spectrum of kinks. Outside of the action, most of the humbling was in the form of talking down to her and utilizing vulgar language that, as a Maiden, she was not at all accustomed to.

This is a relatively short Visual novel, the entirety spanning 13 adult scenes. The main Protagonist is a bit dull, with very little learned about his past life outside of his love for video games and coffee. He’s not much different in this world either; most of his time is spent woodworking, then working his wood with the Maiden. That was a stretch, but we’re trying to hit a word count here.

Scenes themselves tend to be pretty repetitive as well. You get a brief interlude between interactions but then are thrust back into the action.  Towards the end, there is little to no break between scenes, and you are pummeled relentlessly with these scenes. I guess this is necessary, but it led to some scenes feeling forced and uncomfortable.

The Maiden grows as a character as themes of romance arise. She’s the most interesting lead as she hungers for new experiences and even preaches her church sermons in revealing attire. The protagonist on the other hand does not change at all.

I understand that in being able to humble the Maiden, the protagonist needs to hold most of the power within the relationship, but he’s a total dick. There is little to no romance built between the two, and most of the emotion comes during the eroge scenes.  Although this story is described as Nukige, there are a few missed opportunities here, which makes me question why have the isekai premise in the first place.

The Humbling of a Holy Maiden is an explicit, niche, kinky visual novel through and through. While the writing is somewhat bearable, it’s later eroded to adjectives and fleshy nouns. This becomes a rather messy Nukige, where it’s tough to connect to the characters. Sure, it hits a lot of different kinks, but it mostly feels like it’s just checking off the boxes then attempting any natural flow for its narrative. 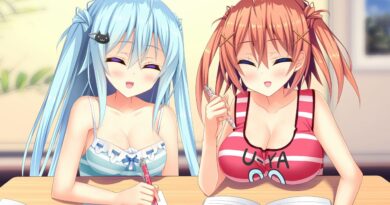