Fellow Traveller and Paranoid Productions announced that their cult-infiltration adventure game The Church in the Darkness will release on PlayStation 4, Xbox One, Nintendo Switch, and PC on August 2.

The Church in the Darkness has players assume the role of an ex-cop named Vic who has set out to infiltrate the South American compound of Freedom Town in search of his nephew. The compound is run by Rebecca and Isaac Walker, two individuals who won’t look too kindly on someone trespassing on their lands. Players will need to sneak through the compound and unearth their motivations, plans, and secrets to not only find Vic’s nephew but possibly bring down the cult altogether.

The Church in the Darkness is influenced by many real-world cults and puts the spotlight on some of their manipulative tactics. The game features multiple endings for each scenario, which is influenced by the level of stealth and how the player approaches gameplay. The game also encourages exploration as many of the doors are open to players to enter rooms and search for valuable items and clues. During some confrontations, cultist might even be willing to turn their backs on the group and join you on your mission or at least help you out.

Narrative Adventure ‘In Other Waters’ Gets Switch and PC Release Date 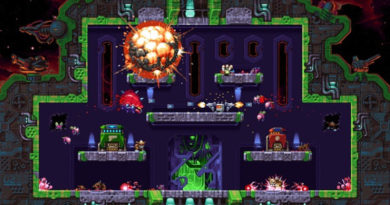