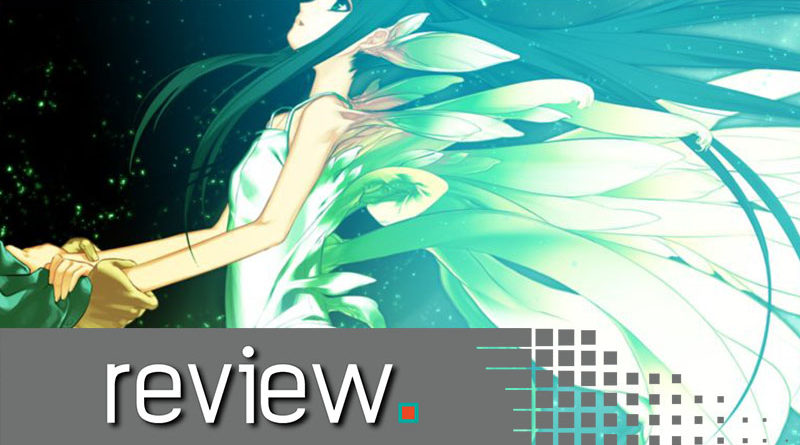 
I recall asking for visual novel suggestions and one game that was always mentioned would be Saya no Uta ~ The Song of Saya, but for one reason or another, I never got around to playing it. Despite already knowing the synopsis of this game, after finishing the story, I could easily see why the writer, Urobuchi Gen, is so famous in all regions. It should be noted that the Steam version of Saya no Uta ~ The Song of Saya is censored with an 18+ patch on JAST USA for $3.99.

The Song of Saya follows the male protagonist Sakisa Fuminori who has lost his parents due to an accident. Barely managing to survive, he develops an unusual illness and starts to see the world in a very different way. During his delusional state, everything around him resembles disgusting meat and blood, but that’s not even the half of it. People who used to be his close friends to him look like unidentifiable monsters and even their voices sound strange. It’s no wonder that Fuminori starts to distance himself from everyone until he meets a strange girl named Saya. Sure, she might not be completely human and might look off to others, but the special thing about Saya is that she only living thing who looks like a human figure to Fuminori and therefore, she became his living purpose.

One of the things about Saya no Uta ~ The Song of Saya that I immediately noticed is that it made me uncomfortable while reading through it. Although the images are not very scary, the writing will make anyone shudder by its detailed and creepy descriptions. I began to imagine how the grotesque things in the story looked like even without actually seeing images of it which made for a rather creepy experience. To be honest, I never read a visual novel which made me this uncomfortable before, but I guess that’s a testament to how good the writing is. Although, you should be careful in case you can’t handle sensitive topics. This leads me to the next point, the story keeps a serious tone throughout its entire runtime. Given that this is technically a romance, I expected to read at least something cheerful or happy, but all the scenes here are rather depressing, which left me troubled. I can’t recall any moment in Saya no Uta ~ The Song of Saya where I had the thought of envying the main couple, but at the same time, I was sort of admiring their affection for each other. I would even say Saya no Uta ~ The Song of Saya wanted to show its reader how much some people are ready to sacrifice for romance. Everything else besides Fuminori and Saya didn’t seem to matter at all, and I have to admit, although it doesn’t seem like it at first, their love for each other was very sweet, just a little unusual.

In all honesty, I was even shocked at all the disturbing topics which are getting thematized in Saya no Uta ~ The Song of Saya, yet it was hard for me to stop at the same time while I was in the middle of the game. Before starting, I had to debate with myself whether I was mentally ready to continue reading through the disturbing happenings. Although Saya no Uta ~ The Song of Saya is a short game, I couldn’t finish it in one go and had to take several breaks to be able to calm myself down and digest the events. I never believed a game could make me feel this way and it became a love-hate relationship because of it. On one hand, I was extremely scared to go on, but on the other, I had to know what will happen further in the game. The disturbing events are not everything in Saya no Uta ~ The Song of Saya as it can be quite mysterious, and we don’t know what the deal with Saya is at first. Tiny bits here and there get revealed while playing through the visual novel, leading the reader to become suspicious about Saya. I was just very disappointed that we never get to see Saya’s true form but can only read about it since it was one of the things I was looking forward to. The mystery is still ongoing and is left to your imaginary, although maybe you want to think twice about imagining the happenings in Saya no Uta ~ The Song of Saya.

There are three different endings available in Saya no Uta ~ The Song of Saya, but it still feels like playing through a kinetic novel. A single choice decides whether you want to go on with your journey with Saya, or if you wish to stop here. That being said, one of the endings might be achieved quite early in the game and it feels like the reader can just wrap the story up if the topics are too brutal for one’s taste as even this end gives the reader a nice conclusion of the plot and it feels like a complete, yet, unsatisfying ending.

Despite being such a short game, Saya no Uta ~ The Song of Saya contains plenty of beautiful and creepy CGs that are well-drawn and if I had to pick the most gorgeous one, I would pick every one of them. Graphically, while genitals are not visible, you will see half-naked women here in very uncomfortable situations. I was impressed that Fuminori not only has his own sprite but is also voiced. The voice acting is very convincing and of high quality as well as the creepy soundtrack which greatly complement the game’s atmosphere. Even the voices from Fuminori’s friends sound weird and I could immediately tell this was the case without being able to understand Japanese one bit. Overall, if I have to describe Saya no Uta ~ The Song of Saya with a single word it would be either “disturbing” or “uncomfortable” and this visual novel will surely make you feel this way throughout most of the story. I have to admit Saya no Uta ~ The Song of Saya is by no means meant for weak-minded readers. Even though romance is its focus, it might not be the typical love story you expect. However, I suppose this couple is sort of adorable in their own way. I never knew a game could bother me so much and it’s crazy when I think about how much the story’s writing was able to affect me. What ends up wrapping up all of this visual novel’s excellent presentation, is the gorgeous artwork, voice-over, and soundtrack. These elements each complement the game’s story making this a truly interesting and unique experience.