PLAYISM has announced Noel the Mortal Fate is coming to Switch worldwide in February 10. The date was already revealed for the Japanese release, which also included English as a language option but a western date hadn’t been announced. The western eShop pages are now live as well, with the North American virtual shop showing the game will be priced $24.99.

Noel the Mortal Fate is an adventure game created on the RPG Maker software. Though its developer, KANAWO, started it as a free episodic game, they have since been updated for Steam and that edition has been remade for consoles. PS4 and Xbox versions are planned but release dates have yet to be announced.

The game tells the story of a young pianist called Noel. After a series of events, she sees her life turned upside down losing everything she held dear. Now a fugitive, she plans her revenge against the people who took her precious future from her. Alongside the devil Caron, she’ll have to fight powerful people in the 7 episodes (called Seasons) included in this first part of the episodic series. If you’d like to know more, check out our review of the Steam version.

One special aspect of this console release is the addition of Season 3.5, which takes place in between Season 3 and Season 4. As the battles are taking a toll on Noel, Caron decides to grant her a little respite. After going to a cat café, the two end up looking at a case of a mysterious woman.

Noel the Mortal Fate’s console release will also include updated graphics, a controller adaptation, and a refreshed story. It also features a new opening video with the song Gyakkoudoumei, which is performed by Jin featuring Kashi. Check out a few screenshots shared by PLAYISM: 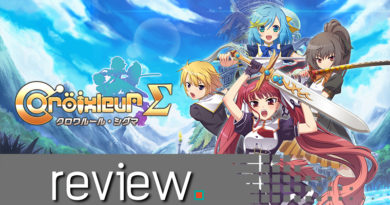