When the Kingdom Hearts 20-year anniversary event occurred last week, a special Memory Locker website was launched containing quotes from various staff members who have worked in the series in varying capacities. While the quotes themselves were removed following the anniversary event’s conclusion, and Square has stated that they will be available for viewing again later, Kingdom Hearts fansite KH13 kept images of each message and translated them.

The following messages originate from my coverage on KH13, with the translations having been done by our team’s Ryuji and corfidbizna:

It’s already been 20 years! Before I knew it, I was retired and the next generation of staff had taken over.

However, getting to work on such a long-term series made me really happy as a producer. I wish to thank all involved, especially Nomura, the director!

Though I’ve left, I hope you will continue to support the Kingdom Hearts series.

Memories… there are too many to bring up here. The Kingdom Hearts series is a part of my life, so I can’t talk about myself without talking about it.

However, I can say for sure that for the past twenty years, across all of Kingdom Hearts, I was able to meet, fight, and grow up with a lot of people just like Sora. I am grateful for the miracle to have been able to participate in something so beloved, surpassing itself and going across generations.

From here on out, I want to travel around the world with the people who continue to give color to Kingdom Hearts.

I look forward to working with you all in the future.

Kingdom Hearts, congratulations on the twentieth anniversary! I started working on Kingdom Hearts right around when I started voice acting, so Riku is the role I’ve had the longest. I’m super, super grateful and glad.

Those days, I couldn’t tell right from left, but together with Miyu-kun and Risa-chan, we recorded, had fun, (and ate dango) together. Little by little I was able to grow up. I have so much gratitude.

I’m heartfeltly happy I’m able to walk alongside Riku and grow more as an actor. I think I’ll always stand by him!

Congratulations on reaching twenty years. I am happy to have made connections with everyone throughout the series, including those who are reading this now.

Though the things I can recall about working on this series are incalculable, I particularly remember that whenever I’d come to the studio, I’d get the strong sense that the people working on it put all their hearts into it.

As Kingdom Hearts continues, I hope to make many more heart-to-heart connections!

Gosh, how has it been 20 years already? I am surprised that so much time has passed. After all, the [Kingdom Hearts] series has always been deeply and profoundly involved in my life.

Each song is colored with so many memories that I can immediately recall the circumstances and feelings I was in when I first composed them.

Just as music has always been there for me through the hard times and happy times, I hope that, for all the fans who love the Kingdom Hearts series, these songs will always be close to your hearts, just as they are for me.

When I first met Cloud, it was also around when I first learned of Kingdom Hearts. It was a dreamlike experience, a magical moment.

Doing the first recording, the tension and excitement was over so fast that it didn’t feel real until the game was released.

Now, it’s been twenty years, and the world of Kingdom Hearts is becoming so big.

I’ve been voice acting for a long time, but I think Sephiroth is the most exemplary character I voice.

Final Fantasy is a series that is loved and recognized by many people all over the world. It became such a cultural phenomenon in Japan, and as such, I sometimes think of Sephiroth as a big part of myself. Imagine my surprise when I heard he would be in Kingdom Hearts! The game’s worldview and the character’s atmosphere were like oil and water, so I was confused at first (laughs).

I remember the breathing and damage sounds for the fight were particularly difficult for me. Normally the super-human Sephiroth wouldn’t make sounds like that, so it was hard to picture.

Message No.8: Koichi Yamadera (voice of Donald Duck, Beast, Genie, Stitch, and others)

Not only do I get to play Donald Duck, but various other characters that have on-screen appearances thanks to the games.

It’s always fun when characters I play get to have conversations with each other!

I wish for Kingdom Hearts to continue being something people from all around the world can love.

Congrats on the twentieth anniversary.

I first became involved with the series in 2005 with Kingdom Hearts II. When we were recording, I was in the second year of junior high school. I wasn’t expecting to grow up to become a voice actor.

Because I’ve been in so many series, I can trace my own path to adulthood with each instance. There’s not much else that makes me so happy.

In this series, we always took time to record each line very carefully.

For Aqua’s last line in Birth by Sleep, “we’re connected,” (in English it’s “there is always a way”) we had to do a number of takes.

At that time I was thoroughly tired, but I was also thinking, “That was fun!” That was one of the many feelings that were welling up. It was my honor to be involved in such a rewarding production.

Congrats on the twentieth anniversary.

Terra’s role in Birth by Sleep was something I was very dedicated to. I kept daily thoughts of Ven and Aqua in my chest when I would go to and from the recording studio.

Though, after we finished recording, I met Uchiyama-kun, who plays Ven, for the first time. He had a dry mood that immediately reminded me of someone who was on a lonely journey (laughs).

During the performance at the concert I didn’t know how that scene was going to go. I tried to convey the feeling of an unfulfilled, solitary journey and gave that performance of Terra on the first try. [Referring to the Kingdom Hearts Concert -First Breath- held in 2016]

I thought the sacred mood of meeting Naminé was really lovely.

And, of course, I haven’t forgotten about Setzer (laughs).

I really love everything about Kingdom Hearts. It’s practically a dream game series!

In [Kingdom Hearts III] I am Rapunzel’s Japanese voice, and I really liked going on an adventure with my favorite, Donald— truly a dream-like experience.

To those around the world, look forward to this series with anticipation!

It was twenty years ago when the first Kingdom Hearts game was released.

Those days, my brother who was in middle school would be the one who played and I would excitedly watch from beside him.

I didn’t realize it because I was a kid at the time, but a project made by Disney and Square Enix is actually quite shocking.

Particularly as a fan, I look forward to more Kingdom Hearts titles coming out from now on!

Organization XII’s story flow throughout the series has been impressive.

First, they were introduced in Kingdom Hearts II, and then became a familiar presence in 358/2 Days, and finally, no longer becoming the main enemy.

When I first started illustrating, I thought: “Drawing thirteen people will be hard”, because that’s usually how it goes in the manga industry. But that wasn’t the case at all. It was a pleasure to draw each and every one of them.

When Roxas, Xion, and Axel met each other once again, I must say: I cried a river at that time!

During a development meeting, I said this directly to Tetsuya Nomura: “I want to see a black-haired girl drawn by you!” and soon after, I suggested that she would be called Xion.

The name “Xion” comes from the mix of the imaginary number (No.i) and X. It is the sound of the tide against the sound of the waves. Xion’s name in the language of flowers can also translate as “I will never forget you”.

In Kingdom Hearts IV, Sora has found himself in Quadratum with Strelitzia, a prominent character from Kingdom Hearts Union χ. This setting is an afterworld for the two characters following their tragic fates. Additionally, this new saga has been titled the Lost Master Arc. Some combat footage is showcased, with Sora performing Keyblade transformations against a giant entity that seems to be a Heartless? We don’t know for sure. 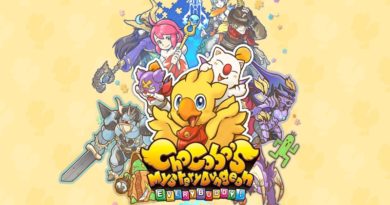