Players take control of Flynn, who lives on the island of Rosantica that was once ravaged by war and an evil presence known as “The Scourge.” Flynn: Son of Crimson is a handcrafted 2D game with various areas to explore. The goal is to fight back against The Scourage and destroy the Lord of the dimension Zealock. Players will add to their abilities utilizing mythical companies that can reveal new areas and paths. Gameplay is largely action based with a few environmental puzzles to take on.

This is a fast-paced take on the genre and has players traversing miniature stages fraught with chaotic danger. Magic is emitted by the main character’s hands and can be permanently upgraded to make the challenging runs more feasible to complete. Variance in dungeon design can also be initiated by mixing keys and runes.

Players will have to remove items from a box after they’ve just moved in and placed the items around the house. These items include plates, cups, food, bedding, clothes, everything. The style takes a pixelated look to give players a retro and creative way to take on such a tedious task that no one wants to do in real life.

In this title, players traverse the Deep Woods and command a magical swarm of curious creatures to battle precarious wildlife and supernatural foes, construct and craft new pathways, and discover the secrets of a forgotten world. There is no end to the wondrous whimsy players can experience with magical creatures and guardians inhabiting this world. If you missed it, check out our review of this game’s PC version.

After a long war with the humans, the few androids that remain in Arcadia are running out of Anima, the energy that gives all robots consciousness. So it’s up to you, Alma, to find a way to recover your memories and save your friends from becoming Unsighted. If you missed it, check out our impressions of this game’s demo.

In Next Space Rebels, players will develop from a naive rocket hobbyist into an experienced space activist by designing, building, and launching rockets of increasing complexity. 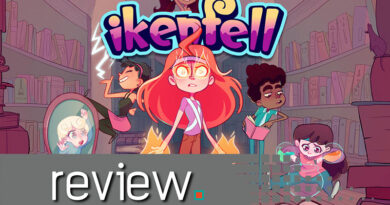