I’ll just let you in on the fact that I’ve been a fan of the God Eater series since it made its debut on the PSP. I loved the post-apocalyptic world that the game presented to players with humanity at the mercy of a growing threat of beasts known as Aragami. In their last leg of defense, human-created weapons, known as God Arcs, are fused with compatible individuals to fight against these monsters in an environment where a normal person wouldn’t be able to survive for more than a few minutes.

Although the series hasn’t gained too much traction in the west, Bandai Namco has continued the series with the latest entry, God Eater 3. Being the first real entry in the series developed for modern consoles, I had some pretty high expectations for the game. Thankfully, everything that I loved about the series is still present, with a load of new features that make it even more accessible. The developer definitely doubled down on what fans have asked for from the series and it made the game so much better because of it.

God Eater 3 tells the story of a world that is at the mercy of the Aragami. A few years have passed since the events of God Eater 2 and a new threat has appeared known as the Ash Aragami. These new beasts are stronger and more devious than anything that humans have ever encountered before, that is until a group of AGES rise up with the skills and power to defeat the beasts with the help of a humanoid girl named Phym.

Players assume the role of an AGES prisoner who has grown up in captivity of the government and spends all their time behind bars in a port structure. Being that AGES are infused with Aragami cells, they are able to survive for more than three minutes out in the wasteland, but this just means that they must fight the Aragami threat for the government. AGES are treated as “Dogs” and looked down upon by the people. The story makes this clear as the guards will demand that you not damage their God Arc property every time before leaving a mission. I thought that this set up the situation that the characters are in extremely well, and I actually disliked being sent out on missions for the guards because I wanted to be a rebel. As luck would have it, you do find a way to escape, which is actually when I felt the game truly began.

I don’t want to ruin too much of the story because it is one that the developers really flesh out well over the course of the game. I ended up caring about each of the characters and what they were going through as they fought for not only their freedom but for the survival of humanity, even if that means working with a corrupt political system. I understand that story isn’t at the top of everyone’s list when they think of God Eater, but I found myself wanting to take on story mission after story mission if only to see what will happen next. Mission structure in God Eater 3 has players access a menu where they can choose new or old missions to play through. These missions are either story based or optional missions that will transport the player outside of the port so they can fight Aragami. Missions involve hunting down Aragami and each mission will end with an epic battle against a large Aragami or an Ash Aragami. Where the word “repetitive” would usually be read somewhere around here, I found the straightforward mission structure to be nothing short of thrilling. There’s a nice variety of Aragami, especially after Rank 4 of the game’s story, that will give players a pretty decent challenge. Each Aragami has individual weaknesses and elemental attacks that should be taken into consideration before going into battle.

However, I know what we’re all here for, the loot. Each mission will let you know the percentage of getting materials before they are accepted. These material are used to create new weapons, items, costumes, and accessories. With that said, blueprints are required to craft these items and those are found by defeating Aragami. I really enjoyed how weapons and armor crafted are based on parts of the Aragami that I defeated in battle. Throughout the game, the weapons will get stronger as the Aragami get tougher, which means upgrading your loadout between missions is crucial to get the most out of what God Eater 3 has to offer. The amount of customization in God Eater 3 is extremely deep and bleeds into customizing party members individual skills, buffs to your weapons, armor, and guns, and even what type of Burst Arts you can use during battle. This is a feature in the game that if you don’t find enjoyment in, then you probably aren’t getting the most out of what God Eater 3 has to offer. The micromanaging of these systems are also easy to learn as the game provides tips as well as properly lists the conditions that need to be met in order to make or equip something. I had a blast setting my sights on a particular weapon and playing through missions to get the item needed to construct it. With this feature alone I sunk hours into making my character fit my playstyle and needs as a player. On the topic of variety, similar to previous God Eater titles, the dungeons in God Eater 3 are used multiple times throughout the game. When it comes to God Eater 3, I think they did a good job at setting up a nice environment for countless battles. With that said, it does get a little old visiting the same place over and over even though the map shows that you’re moving to a different area. I would have liked to see more level designs from the developer, but as it stands, the levels are pretty large in size and feature plenty of different themes.

New features in God Eater 3 have a lot to do with making the game feel seamless with whatever you do. Missions are kept short and sweet offering a major battle that will push your limits from time to time. What’s really neat during battles is how there’s a burst system that has three different levels that will increase over time as you devour enemies. Burst attacks, which can be customized, give the player access to elemental damage, longer combos, and other buffs. Similarly, players can link with another character during battle to get a boost from them, which can also be customized. There’s also an additional acceleration Trigger feature that gives players a range of passive skills such as boosting their strength while in burst mode.

As I touched on previously, God Eater 3 demands that the player fine tunes everything that they don’t like about the combat to fit their needs. The first hour of the game does not reflect this, but after the first act, features and systems really open up to allow the player access to a range of options. The new features in the game do well at happening naturally in battle and don’t require too much extra thought outside of taking down the huge Aragami that’s in front of you. I can say that with every loadout and partner combination that I went out on missions with, I found one benefit or another during battle, which makes this game a little more approachable for newcomers. What I enjoyed most about God Eater 3 is that the fast-paced missions structure and the story made it tough to put down. I found myself saying, “Okay, one more mission” after each return trip back to the port. This has a lot to do with wanting to see what will happen next to the Chrysanthemum crew, Hugo, and Phym because there are some pretty great twists as well as some frustrating moments that deal with this politically driven world that make this a story worth experiencing.

In the end, God Eater 3 offers so many deep features and a battle system that does enough to constantly hold the player’s attention over its lengthy main campaign. With no shortage of missions or ways to customize your experience, God Eater 3 is a game that will consume a great deal of your time as you work towards perfecting your equipment and seeing the story through until the end. God Eater 3 is the entry in the series that fans, like myself, have been waiting for. 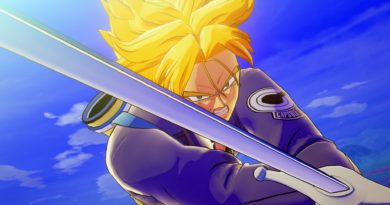