During CES 2020, Corsair launched a new line of CPU coolers, aimed to handle the rising temperature demands of desktop processors.

The A500 Dual Fan CPU Cooler is a high-performance air cooler, with a focus on a low-noise operation able to coll CPUs up to 250W TDP. This fan features four direct-contact heat pipes and two Corsair ML120 magnetic levitation bearing fans, controllable via PWM for precise adjustment of fan speeds between 400 RPM and 2,400 RPM. The unit is easy to install and is compatible with AM4, AM3, FM2, LGA115x, and LGA20xx CPUs.

Additionally, the company revealed the iCUE H100i RGB PRO XT, H115i RGB PRO XT, and H150i RGB PRO XT, which are aimed at offering a cooling performance with a 240mm, 280mm, and 360mm radiator respectively. Each of the fans is an all-in-one liquid-cooled unit fitted with Corsair ML Series PWM fans for control over the fan speeds up to 2,400 RPM on 120mm models and 2,000 RPM on the 140mm model.

The iCUE software allows owners to customize their RGB lighting on the pump head from 16 individually addressable RGB LEDs. The software also enables users to synchronize the lighting with all other iCUE-compatible components and peripherals in the setup.

You can check out the A500 fan below: 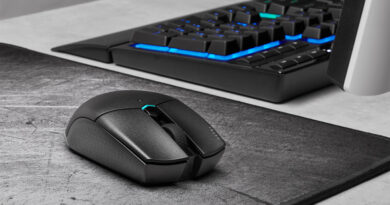