Ubisoft’s magical side-scrolling RPG, Child of Light has made its way to the Nintendo Switch via the Nintendo eShop with a $19.99 price tag. Child of Light Ultimate Edition has the full game in all of its glory and seven add-on content packs that includes character skins, an additional mission, and more.

One notable addition is an exclusive Nintendo Switch feature that lets you play the game in co-op mode via the Nintendo Switch console tablet screen or a single Joy-Con — which means a second controller isn’t required to play co-op with a pal.

For those that haven’t heard of Child of Light, it’s a classic RPG that was released back in 2014. You embark on the coming-of-age journey of Aurora, a courageous princess determined to save her lost kingdom and ailing father by recovering the sun, moon, and stars that were stolen by the Dark Queen.

Child of Light features good ol’ turn-based combat with an active-time battle system that’s similar to that of the classic JRPG series Grandia. In true RPG fashion, you have the ability to level up, gain skill points, and toy with a deep crafting system to upgrade equipment.

With a beautiful hand-painted art style, a mysterious world to explore, and a classic story — playing Child of Light is like stepping into a childhood fairytale.

Get an idea of what’s it like via the launch trailer and screenshots:

Author’s Take: Having loved playing Child of Light on PlayStation Vita, I’m looking forward to playing the game on the go yet again thanks to the Nintendo Switch version. 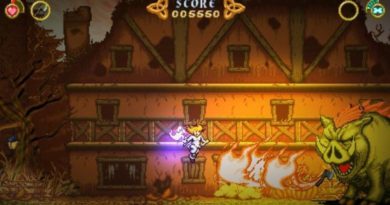