Capcom announced that new titles are going to be released for Capcom Arcade Stadium, which will release on PlayStation 4, Xbox One, and PC on May 25. Currently, the collection is available on Nintendo Switch and offers 10 games from three packs across different eras of arcade titles from Capcom’s past.

The company has confirmed that they plan on releasing more games under this nostalgic umbrella. However, more information will come at a later date.

Still, the publisher did confirm that a new Invincibility mode will be added to the game that gives players the option to be a complete tank. Strangely, this mode will be available for a price of $0.99. This is in line with the way the collection offers different packs for $14.99. However, it’s kind of a strange approach considering it could have been offered in a free update.

Another DLC available will be “Display Frames Set 1,” which will also cost $0.99 and gives players access to 32 title-specific display frames that unlock new customization options for their digital arcade cabinets. Both modes will be available on May 25.

Capcom Arcade Stadium is available to pre-order today on Xbox One and Steam and early purchasers will receive the newly announced “Display Frames Set 1” for free up until June 8. Additionally, the original Ghosts ‘n Goblins add-on game for Capcom Arcade Stadium on Nintendo Switch will be on sale for 50% off for a limited time between April 26 and May 15. 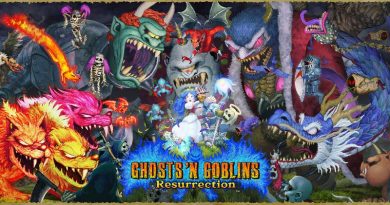