These eroge games are getting pretty deep with their themes and for some, it might strike all the right chords. Gossip has always been a driving for anyone in school, it pretty much encompasses my experience during my later teens. Well, developer ammolite has taken gossip and backstabbing to a whole new level in their newest title, Bitter Exclusion, published by MangaGamer.

At first glance, this may seem like another eroge where the sex scenes are the only reason why anyone would pick this up. While that could be true for some, there’s also a rather deranged and messed up story that kept my attention to the end. I’m not always 100% sure why people want to pick up eroge titles, whether it be for primarily the H-scenes or the story, but thankfully Bitter Exclusion has a pretty good balance of both. The story centers around Shouhei Kido, from who is gathered to be an outcast at his high school whether he wants to be or not. However, he’s not alone, he has his best friend, Genta Idehara, at his side to talk about girls and which anime series they are watching. There’s also the childhood friend, a girl in class who Shouhei has his eye on, Aoi Nonohara, she’s quiet and smart and can usually be found with her loud-mouthed friend Kaho Izumi.

Sound basic enough? Well, the story structure is until ammolite throws you a curveball — all the students in the class have sex with each other and typically end up bad mouthing Shouhei behind his back. After a while, this extreme bullying is extended to Genta and then everyone is basically having group sex in the classroom after school hours and being mean to poor Shouhei.

For some reason, this premise actually caught my attention. It’s right from the imagination of a teenager or a late night sleepover with teenage boys talking about what goes down in an after-school club, jokingly of course. The story that the writers have crafted was a huge reason why I wanted to stick with the game through till the end. You want to see if Shouhei ever finds out about his classmates or how he handles his best friend turning his back on him. Bitter Exclusion isn’t a hardcore eroge, so events are kept pretty vanilla. Similarly, it isn’t a hardcore revenge eroge either so don’t expect Shouhei to go to school and cut some people, ya freaks. However, there is enough here to want to see how Shouhei reacts. Sadly, this is the biggest reason why you want to play this game, outside of a few other more suggestive events, there might not be anything out of the ordinary in Bitter Exclusion to excite fans of the genre.

The in-game locations are mostly limited to the school halls and classrooms, which is a bummer, but this isn’t a huge budget title so it’s expected. The character illustrations are rather generic and the two main girls actually don’t stand out in the sea of other anime characters. With that said, Aoi is perhaps the most interesting character besides Shouhei because of her two polar opposite personalities. This made even her stand out even if her design is a bit overused. The gameplay loop revolves around players seeing how the class giggles about Shouhei not knowing a thing during the day. Kaho even tries to play small pranks on him by using her womanly ways to get the guys in class to say or do stuff. Then Shouhei will go home and the sexy time will begin, which as mentioned before is rather vanilla and not too out there. The climax (see how what I did there?), of the story, felt a little rushed, but I was thankful for it after a kind of lengthy second half.

Ammolite did a really good job on the audio design of the game and the voice over. For a smaller budget title, I understand that there are some corners to cut, but the game has consistently good voice work that fit all situations throughout the game. There are also maybe 2 really good musical tracks in the game. 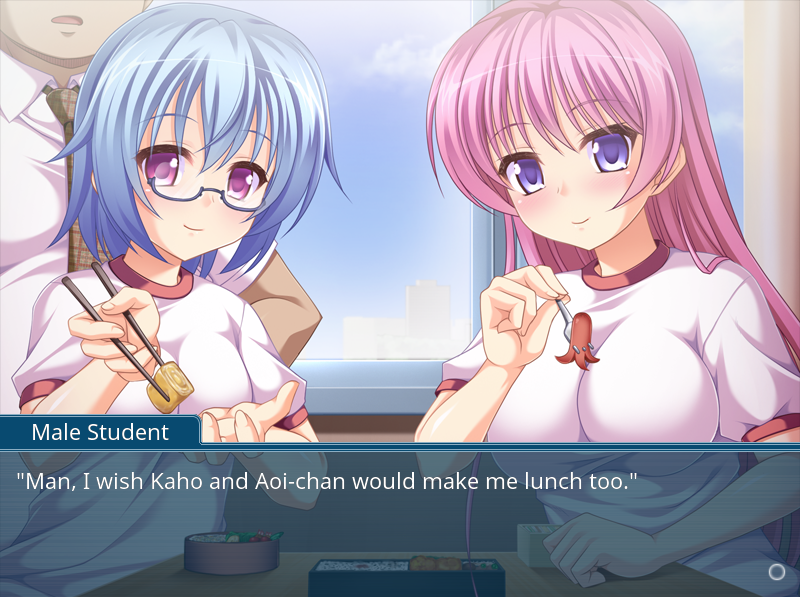 Bitter Exclusion is short but has a nice build up to Shouhei figuring out what exactly is going on. You start rooting for him, even though he is kind of weird sometimes, but it didn’t really play out the way I had hoped. This is a huge step forward in terms of character development from ammolite and I was actually really impressed with the game. Outside of the story, the character designs and locations might not impress anybody or stand out, but the CG scenes and audio work are reasons to check it out.

If you’re into the idea of revenge, that might or might not happen, or just reading through the imagination of your high school self, then I think Bitter Exclusion will fit in just fine with your library of eroge games. This game definitely takes a chance on telling a story that balances out the long H scenes, which in the end made this a worthwhile title.